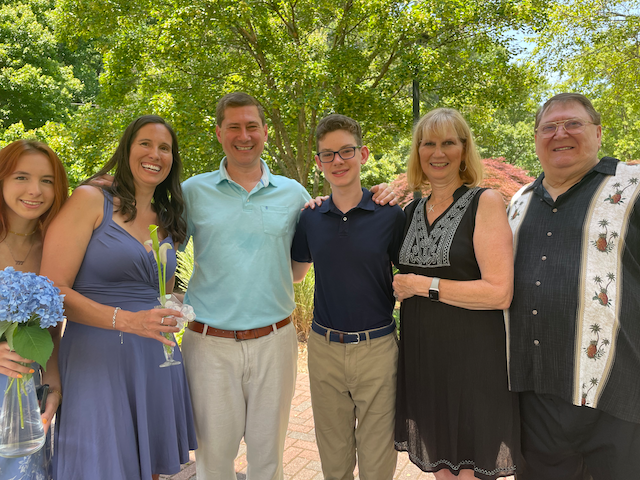 By modern-day wedding standards our lack of wedding planning flummoxed and flabbergasted everyone involved but us. I took a traditional approach to a proposal back in May of 2021 with a fancy dinner at a nice restaurant surrounded by close friends and family. After the meal me and my sweaty palms got down on one knee and asked Cherish for her hand. Cherish said yes, and we continued about our lives because to us we had already committed ourselves to each other forever. Whenever anyone would ask when we were getting married we answered “in the future” and moved the conversation forward to other topics. At the time of the proposal we were shopping for a home and feeling the frustrations of an insane-housing market. After finding a home, the next ten months of home renovations kept us busy. A wedding “in the future” was fine and nothing for us to worry about. Looking back, and comparatively speaking, being engaged for 13 months doesn’t seem out-of-the-ordinary. What could be considered unorthodox is that on May 19th I came home after a work dinner and told Cherish I was booking our honeymoon. I had decided it would be a five-day visit to Anguilla that would start one month later on June 20th. From the deer-caught-in-the-headlights facial expressions I received from Cherish upon hearing this news, I knew I had thrown down the wedding gauntlet. 30 days! The Who, Where, When, and How parts were something to think about later. One might say the key to a good wedding plan is procrastination.

While we love each other deeply and plan to grow very old and die happily in each others arms, we had no desire for the pomp and circumstance associated with modern weddings. As a result there was no real stress, no pressure, and no drama associated with planning the wedding. We bought wedding rings on June 10th. On June 11th I convinced our friend Bob to marry us while is wife Katherine cheered us on. Based on Bob’s availability we picked Wednesday June 15th at 1:00 PM for the ceremony which gave us time to pick up the fitted wedding rings on June 14th along with the marriage license from the county government office. Bob and my parents live a few minutes away from a park and we decided to hold the ceremony there, no reservations required. As to guests for the ceremony we choose to have our parents and our daughter and son in attendance. No formal attire required.

June 15th was a 90 degree sunny day that felt like 120 degrees in the shade. After an introductory speech by Bob about the meaning of marriage and the value of sharing the exchange of vows in a public setting, Cherish and I exchanged the vows we had written.

We smiled, we laughed, we cried tears of joy, and after saying “I do” we kissed.

Rounds of family hugs ensued followed by impromptu photos and 15 minutes we headed back to our cars to head off for a group lunch at a local Mexican restaurant.