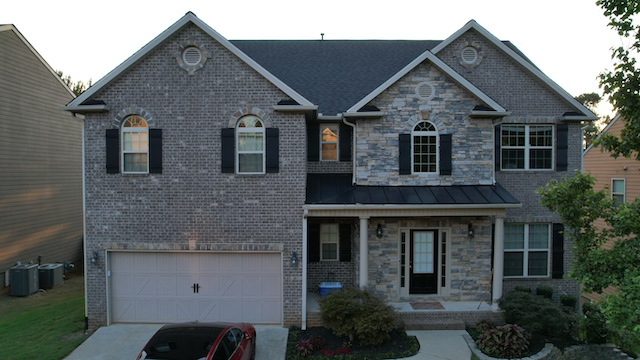 Ten months ago I posted about the move to our new home in this blog. I’m thrilled to share that we’ve made it to the end of the initial home improvement project list! Looking back over the last ten months it is hard to believe it took us this long to cross the finish line from our initial round of projects. And yes, a few few new ones are now on the list. What took so long? Well it turns out gutting and redesigning a kitchen in a post-pandemic world-wide recovery results in rampart materials availability problems and long shipping delays.

As I finished writing the previous blog the exterior of the house was getting a pressure wash and a repaint. We love the result. While we were working on the exterior, we needed some gutter work. The front gutters were not wide enough causing all kinds of issues when it rained at the front of the house. On the side of the house the gutter leaked and on the rear there should have been a gutter installed along the top porch along with a downspout, but that was never done. I had no idea it would take us a month to track down a reliable gutter company. A huge thank you to “The Brothers Gutters” company for the work. We think the house looks much better from the outside now.

From the previous blog, my bedroom closet was a work in progress. I don’t have a “before” photo but it was originally a white wire frame closet. Now it’s an Elfa closet with freshly painted walls and new carpet and I love the result. One could say that the only thing to do now is buy more fashionable clothing so it looks better than my collection of t-shirts :

Cherish has her own closet which, as it should be, is double the size of mine. We were going to replace the same white wire frame with an Elfa closet for her as well using a different design, but decided to put that project on hold and divert the funds to the kitchen remodel. We settled for freshly painted walls and new carpet in her closet and will come back to her closet at some point in the future.

In the original blog I skipped talking about our home offices mainly because we were waiting on desks and bookshelves to arrive. Cherish’s office is on the main level of the house just off to the right of the front door. Originally carpeted, her office received the new LVT flooring that the rest of the main level now has. Her room needed a paint refresh, a new ceiling light fixture was added, and her office desk took a lot longer to arrive than we anticipated. We also hooked her up with a much needed new Office chair from Secret Labs. She also wanted a couch in the office, which is one of the few furniture pieces that came with us from Tennessee.

For my office, it is in the finished basement. The room I’m using was finished into a bedroom by the previous owner. After a fresh coat of paint, some bookshelves, wiring and some desks were added it’s now my office / geek room. With the clarity of hindsight we should have replaced the carpet before installing the bookshelves, but we had higher priority items (<cough> new Kitchen </cough>) so the budget for new carpets in the basement was scraped. I love the room, but new carpet is definitely a future project. I still need to hang some photos and wall decorations and I’m still waiting on some under the desk cable management to arrive so I can clean up all the wires under the desk, but for the most part this is where I spend most of my days. Here are a couple of photos of the room.

And so now we make it to the big reveal….. our new kitchen.

As you enter the house from the front door and walk past the foyer, down a short hallway, you enter the kitchen. Look left and the room is open to the living room. Look right and there is a double-door entryway to the dining room. In my delusions of grandeur 10 months ago, I figured designing a kitchen would be as simple as pointing at a photo of someone else’s kitchen, saying “Give me that!” and walking away with a new kitchen a few weeks later. Silly me. Instead we brought in 4 kitchen design companies and started what would become a 4 month design process. In no particular order, the scope of work looked like this:

And in the end this is what it looks like:

As I write this, the painters are coming out one more time to do some touch up on the walls and ceiling and well pretty much the entire window frame for the kitchen, but overall we could not be happier with the finished product.

For the dining room, we removed the carpet and replaced it with the same floor as the rest of the main level. A fresh coat of paint for the walls and ceiling and a new chandelier finished the space. The previous owners offered us the dining room table and chairs but we declined and opted for a different style and we ordered the new table about 8 months ago. It showed up almost 6 months later and arrived about a week before we gutted the kitchen. It’s Cherish’s first formal dining room table and we love it. The chairs are comfy as well so we are excited to have guests over to take them for a spin. In the photo below we don’t have the table leaf or all of the chairs setup as the painters need to come back and finish repainting the quarter-round. We wanted them to have space to work but we also needed a functional table to eat at. This is another room where adding stuff to the walls is on the to-do list, but we love the table and chandelier. And the no carpet.

With 10 months of effort, a few minor issues cropped up along the way that required replacement/upgrades including:

I’d like to extend a huge thank you to our primary contractor Craig Nendza, the owner of Finishing Touch Remodeling who is responsible for completing most of the work discussed in these two blogs. He’s too busy to run a website, but if you would like to contract with him for work, he can be reached at 404-247-9450. Another big thank you to the following who supplied and installed materials:

So what’s next? Well the short answer is that the house needs 28 new windows installed. And maybe, just maybe, we can start on my home theater. If anyone wants to share a winning lottery ticket with me that would be a big help.